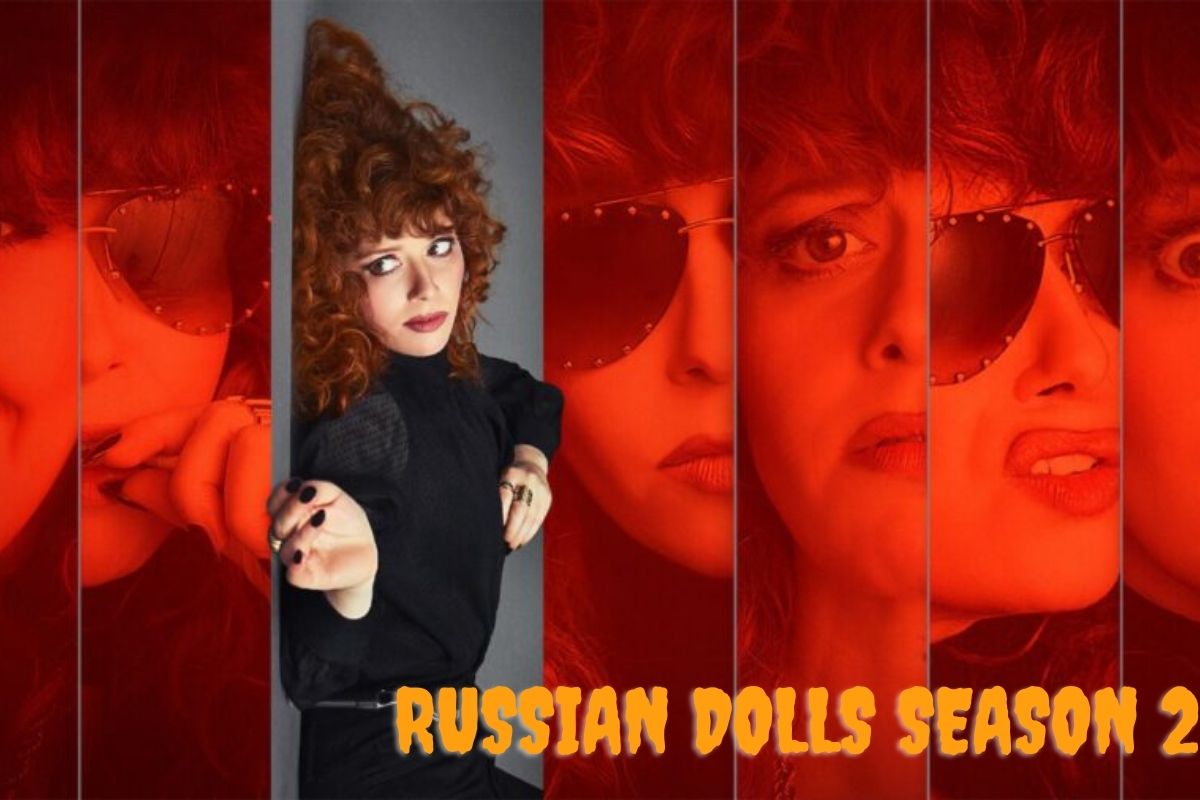 With every death, more and more people fell in love with the first season of Natasha Lyonne’s 2019 twisted time-loop comedy Russian Doll. Lyonne stars as hard-partying New Yorker Nadia (Lyonne), whose 36th birthday ends in death, forcing her into a scenario similar to Groundhog Day in which she must die repeatedly to solve the mystery of what killed her in the first place, to begin with. Midway through the season, Nadia meets Alan (Charlie Barnett), who’s trapped in a similar loop. Together, the two of them form a time-bending odd couple trying to get unstuck, and the result was a wildly popular show that garnered a great deal of critical acclaim and Emmy nominations.

While many lauded the series for being perfectly self-contained in its first season, Russian Doll co-creators Lyonne, Amy Poehler, and Leslye Headland indicated upon its release that they were interested in pursuing a multi-season arc. Then, several months after the show premiered in February 2019, it was officially renewed for a second season in June 2019. Since it’s been quite a while since the show hit Netflix—and its ending was pretty ambiguous, to begin with—you’re probably curious about where the comedy is headed. Here’s a rundown of everything we know about what Russian Doll Season 2 might have in store.

When will Season 2 of Russian Doll be released?

Russian Doll will officially return for Season 2 on Wednesday, April 20. (So, appropriately, 4/20, for all who celebrate.) Netflix finally announced the show’s return in early March.

Since we first saw Nadia’s horrifying reflection in the bathroom mirror on Russian Doll in the winter of 2019, it may seem like an eternity has passed for those who watched (over and over again). It was ultimately delayed due to the pandemic, but after a long wait, it’s time to officially get excited because we’ll be traveling through the multiverse with Nadia very soon.

Is there a trailer for Russian Doll Season 2?

A couple of weeks out from the premiere date, Netflix dropped a full-length trailer for Season 2—finally giving fans some insight into what the new installment is actually about. After Nadia stumbles onto a subway car that resembles “some kind of ’80s flashmob” and features ads for Sophie’s Choice, she realizes that she’s been transported back in time. The universe has finally found something worse than death: I broke time,” she tells Alan as she reunites with Alan. It looks like the two-time travelers, er, “time prisoners,” as Nadia says, are forced into solving some kind of unfinished business, going from the present to the ’80s to the early 1900s. Season 2 looks as dizzying and wild as Season 1 did, but it’s even bigger and better.

If one trailer wasn’t enough for you, there’s also a teaser available that dropped when Netflix announced the premiere date. It’s another preview of Nadia’s latest adventure, showing her getting on the subway, falling asleep, and ending up in some sort of time-travelling train car that takes her to some eerie destinations, instead of her stop in the Lower East Side. It’s all very trippy and at one point she says, “When the universe fucks with you, let it,” so get ready for what’s sure to be a very maddening second season.

How many episodes are in Russian Doll Season 2?

According to IMDb, we’re in for seven new episodes this season. That’s one less than Season 1, but we’ll take what we can get.

Who in the cast will be back for Russian Doll Season 2?

For some viewers, it may have seemed like a satisfactory conclusion to the story of Nadia and Alan (Charlie Barnett), when they finally broke free of their time loop and celebrated in lower Manhattan. However, Headland noted in an interview with The Hollywood Reporter that no matter the direction the show goes, Nadia will always be a part of it in some way. “Nadia was mentioned in the original pitch for all three [seasons]. But it was not in a very convenient way if that makes sense. We knew she’d be there because Lyonne is the show’s beating heart and soul. She’d be there, whether she was haunting the story or haunting the story itself.”

For a while, though, it was unclear whether Nadia’s friends and partner-in-traveling-through-time-loops were also going to return. Based on cast photos shared by Lyonne, it looks like just about everybody is coming back—which makes sense, given their importance to Nadia. It seems like we’ll be seeing more of Charlie Barnett’s Alan, Greta Lee’s Maxine, and Rebecca Henderson’s Lizzy. Even though Chlo Sevigny’s role as Nadia’s mother was unclear for a while, official photos revealed that she will appear as well.

Are there any new cast members in Russian Doll Season 2?

Based on the intriguing new additions to the cast, it appears that the long wait for more Russian Dolls will be worth it. In early March 2021, Variety reported that Schitt’s Creek breakout Annie Murphy (aka Alexis Rose) will appear in Season 2. Despite the lack of information on her character’s backstory, her Emmy-winning performance on Russian Doll, the tense comedy of her new AMC series Kevin Can F**k Himself, and the Russian Doll aesthetic suggest that her role will be entertaining. While her character’s identity remains a mystery, we do know that she’ll be portraying “one of the good guys” in Nadia’s wild world. Her character will meet an “ally,” according to Lyonne, who will help her come to terms with “the nature of mortality,” according to Entertainment Weekly.

Also joining the cast will be Carolyn Michelle Smith (Colony, House of Cards), who was first reported by Deadline to be joining the cast in mid-March 2021 alongside Murphy. In addition, it’s not yet known what role she’ll play, but she’s already been cast to return in the upcoming season. In addition to the previously mentioned Sharlto Copley (Chappie, District 9), another actor with no prior experience has been cast in a recurring role on the show. Broadway star Ephraim Sykes (Hamilton) is another newbie. He’s set to guest star, and of course, Netflix is keeping its lips sealed to not reveal any character details. With all of the secrecy shrouded in the season, we can only hope they’ll be playing some eccentric personalities.

“sweet birthday baby!” is always the first thing loyal friend Maxine says to Nadia Vulvokov as she passes out at her 36th birthday party. Nadia wakes up in the middle of the party and repeats the night over and over again.

When confronted with the existential conundrum, Nadia fears she’s being haunted (or is just having a bad trip), but that’s before she meets Alan, a man who committed suicide the same night and is now reliving the experience.

As the nights go on, Nadia and Alan realize they have limited time to fix the broken parts of themselves (for Nadia, it’s her guilt over her mother’s death, while for Alan, it’s the realization that his girlfriend’s infidelity was partly driven by his actions).

In the series finale, the two characters awaken on the same night, but in different realities, and neither has any recollection of the previous night’s events.

Using the personal knowledge of one another that they have developed over the numerous time-loops endured together, Alan and Nadia set out to save each other’s lives.

What will Season 2 of Russian Doll be about?

Until February 2022—three freaking years after the release of Season 1—there were zero details about what Season 2 might entail. Now, as the show is gearing up for the Season 2 premiere, Lyonne is finally giving a little insight into what fans might expect. After the events of the Season 1 finale, she told Entertainment Weekly that her character, Nadia, and her boyfriend Alan were able to escape a time loop. This does not imply, however, that it will follow a predetermined narrative path. She referred to it as a season “It’s a wild ride,” he responded to my puzzle box. It’s deep, and it’s wildly out of the ordinary.”

Time travel will be used this time around instead of a time loop, which may sound a bit nebulous. One of Manhattan’s most iconic locations serves as an unexpected time portal for the duo, who discover a fate worse than dying over and over, according to EW. By the looks of the first teaser trailer, it seems like one of NYC’s finest institutions, the subway, is what’s about to double as a time machine for poor, unsuspecting Nadia.

And Lyonne has also suggested that there could be multiple versions of characters roaming the streets, depending on how successful they were in escaping their loops, in a postmortem about the ambiguous finale of the first season, “It begs the question of just how many variations there are on each of the characters. That was taken into account. Whether they’ve entered a new scenario or just finished the round is an interesting question in the context of video games.” That’s something to keep in mind for the upcoming season, too. Wherever it goes, we’re excited to find out what madcap adventure Nadia and Alan are taking us on next.