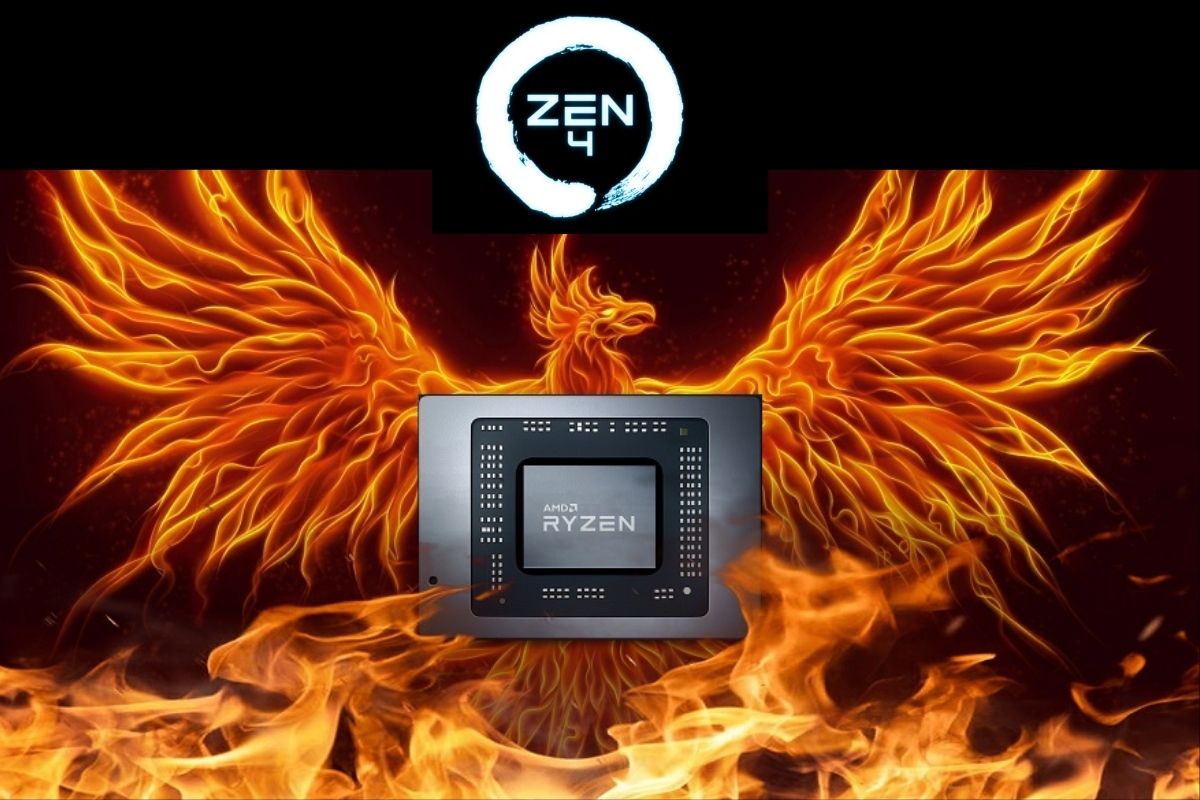 CPUs from AMD’s Ryzen 7000 series will power Zen 4, and the internet is buzzing with the latest information about Zen 4. When you consider that AMD launched its first Ryzen CPUs in 2017, it’s hard to believe. A new Zen architecture, designed from the ground up for Ryzen, served as the foundation for these processors. AMD seized this opportunity to change the course of the CPU market forever.

As of this writing, there have been six new generations of Ryzen CPUs, the most recent of which is the Zen 3+-based 6000 series. This set of processors will be used in AMD’s laptops that were unveiled at the Consumer Electronics Show (CES) in January. You can expect to see the laptops by February 2022, according to the company’s announcement.

You’d like to learn more about AM5? In that case, we’ve got you covered. Everything we know about AM5 so far is listed here.

This article will cover everything we know about Zen 4 despite the fact that very little is known about it. We’ll cover a variety of topics, including:

AMD’s Zen 4 CPU architecture is still under wraps, but we do know that it is an improvement over Zen 3 in terms of performance and efficiency.

The process used to make Zen 3 will not be used for Zen 4. In comparison to Zen 3, the Zen 4 architecture will be built on a 5nm process, which has a 7nm process.

What is an nm process?

Photolithography is a technique used in semiconductor manufacturing in which an image of a CPU is etched into a piece of silicon. Depending on how small the transistors can be made, the process node—the precise method by which this is done—is used to determine how small the CPU can be. “nm” is the unit of measurement for these transistors.

The physics of smaller transistors

As transistors get smaller, they require a lot less power and have less resistance to overcome because there is less physical material for an electrical current to travel through.

As a result, a more energy-efficient chip is created. It is possible to pack more transistors onto an IC (integrated circuit) with smaller transistors, resulting in faster computations. With fewer electrons needed to form the conducting channel below the gate of the transistor, between the source and drain, smaller transistors can switch faster.

The power and efficiency of Zen 4 increase as it is built on a smaller nm process. Because the CPU is almost certainly the same size, we can assume that the same footprint will contain more transistors, allowing the CPU to perform many more billions of calculations per second. The nm process is a big deal, and that’s why it’s the subject of so much attention. 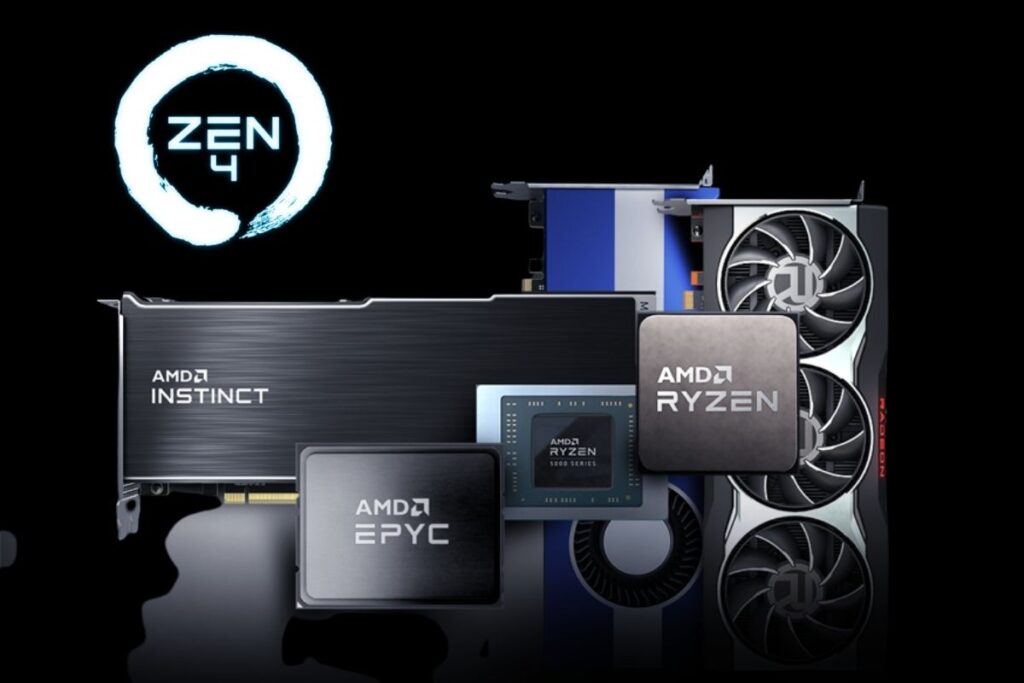 New AMD Ryzen 7000 series processors are expected to be released in the second half of 2022, presumably with new AM5 socket motherboards.

Here is a historical list of AMDs recent CPU architectures:

This follows no specific pattern and it’s hard to deduce a release date from this data alone.

According to Greymon55, the Zen 4 7000 series CPUs will not be released in Q4 despite AMD’s stated plans.
As Greymon55 informed Wccftech’s Hassan Mujtaba in response to his question, the launch is scheduled to occur before September 2022. Could this mean that Zen 4 will be released in August?

How many instructions a CPU can complete in a single clock cycle is measured by IPC, which stands for Instructions Per Cycle. Clock speed, on the other hand, refers to the number of cycles per second that a CPU is capable of completing. CPU performance depends on both of these factors equally, but neither is more important than the other. For a well-balanced and fast CPU, you need both high IPC and high clock speed.

When it comes to finding out when a new piece of technology will be available, Twitter leakers aren’t the only ones to turn to.
As of its most recent patch v7.20, HWINFO now includes support for Zen 4 and AM5.
With the addition of Zen 4 7000 series AMD CPU support to HWINFO’s AM5 platform support, a release date is now possible. A mid-year release for Zen 5 and AM5 is still possible, as HWINFO typically adds support for new technology three to six months before it is officially released.

To support AMD’s Zen 4 CPU architecture, the AM5 socket motherboard, DDR5 and RAMP technology will need to be updated, which will necessitate an upgrade in hardware. Our ‘Everything we know about AM5’ article has more information on these technologies.

Zen 4 is expected to bring the same family of CPUs that we’ve come to expect, and that would be a big step forward.

The new architecture, according to Twitter user Bits and Chips, will enable CPUs to have more cores, in addition to the additional power the smaller nm process provides.

“We will see 24 core Zen4/5 CPUs on AM5 socket. Probably the listed SKUs will be:

Even though all Zen 3-based Ryzen CPUs can run up to 16 cores, it remains to be seen if this will have an impact on performance. The engineering feat would be incredible if this is the case.

Based on the AM5 platform, Bits & Chips claims Zen 4 and Zen 5 will be Zen 4. We’ll have to wait and see how this all plays out.

Bits and Chips has a history of reporting accurate component news ahead of time, but this does not guarantee that we will see this number of cores on the Zen 4 based processors.

There are a few more rumours about the Zen 4 architecture besides these expected core counts.

TSMC, or Taiwan Semiconductor Manufacturing Company, is a partner of AMD in the development of Rzyen CPUs. This time around is no exception, as the Zen 4 is about to go on sale.

According to a March 2020 WikiChip article, with AMD moving to the 5nm process we could see TSMC provide a density improvement of up to 87% compared to the 7nm process. The more transistors you have, the more calculations you can perform per second. TSMC works directly with AMD to produce Ryzen CPUs, and transistor density is critical to CPU performance. We’d love to see these kinds of improvements in Zen 4.

It has been reported that new Zen 4 CPUs could have a 40 percent increase in transistor density, which would raise IPC (instructions per clock) by up to 25 percent compared to Zen 3.

On the AM5 motherboard socket, AMD has confirmed that Zen 4 will be available for use.

We have an in-depth article on AM5, but for the time being, we’ll just summarise it.

Socket 1718 on the LGA motherboard standard will be used for AMD’s AM5 platform when it debuts in 2021 at CES in Las Vegas.

Consumers have mixed feelings about AMD’s decision to abandon the PGA platform, which has long been the company’s standard, but the advantages are too compelling to ignore.

LGA CPUs are easier to manufacture and less expensive because they are less fragile and subject to less accidental damage.

In comparison to PGA CPU pins, LGA CPU contacts or “lands” are smaller in size, allowing for more lands to be added, increasing CPU functionality. As a result, the CPU’s connectivity capabilities may be significantly enhanced.

If you’re interested in learning more about LGA, AM5, chipsets, release dates, and more, be sure to check out our AM5 article.

An ExecutableFix Twitter post hints at some additional details, including some that we already know. The 40x40mm dimensions of the AM5 CPU socket will be preserved, according to the comments. AMD has already confirmed that AM5 sockets will work with AM4 coolers thanks to a clever IHS design on the Zen 4 CPUs themselves.

TSMC has designed the 5 nm process for Zen 4, and this latest leak from Moore’s Law is Dead on YouTube consolidates a lot of what we already know about Zen 4. Both DDR5 RAM and a bump in PCIe 4.0 bandwidth from 24 to 28 lanes will be included in the upcoming driver update.

As predicted by leaker Bitch and Chips, the new Zen 4 chips will have a 25 percent improvement in IPC (Instructions Per Clock) over the Zen 3 architecture. We don’t expect this to happen, but it would be nice if it did.

The Ryzen 7000 series was rumoured to be codenamed Raphael as far back as July 2021, according to a reliable leaker. In any case, we believe the name will stick around because the concept has gained traction in the public consciousness.